I’m going to try to keep this short and sweet because I watched a lot of shows this season and if I tried to type up all my opinions for every show I watched, the new year would come in before I publish this post! So in order from best to worst we start with… 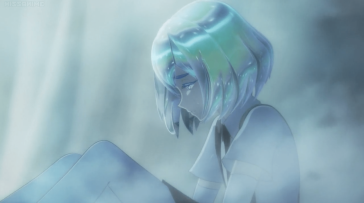 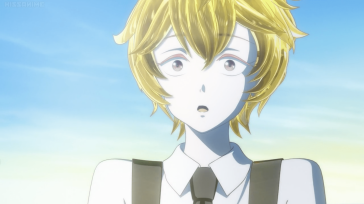 Land of the Lustrous: Anime of the season, if not the entire year for me (I will probably write a separate blog post about this at some other time, maybe after a rewatch). Surprisingly I didn’t give it a 10/10 but that’s only because a few animation problems I noticed in the first couple of episodes held the score back at a 9. A really enjoyable show that appears to follow the conventions of a lighthearted slice of life anime until the plot starts to kick in about episode 4/5. From then on I was completely hooked.

I’m quite torn with this show, through no fault of the animation as it is continuously stunning but rather with the plot. Each episode seems to either be 0 or 100 with not much in-between so the episodes that go full out are brilliant but others, such as the visits to the land of dragons, in my opinion, appear very dull in comparison. I am fully aware though that these episodes are needed to move the plot along and to provide explanations of the world they are living in and of the mysterious Mr Einsworth whom Chise has been taken in by as these are not provided by the character himself, but it does feel a little disappointing watching these types of episodes. On the plus side, they do make these filler episodes very detailed in regards to the backgrounds and scenery, they are truly stunning.

Food Wars: The Third Plate: A continuation on an already great series. There’s not much else to say except I can’t wait for the fourth season to start in April.

Welcome to the Ballroom: I don’t think I looked into this show in my first look posts as I didn’t start watching until the fifth week of the show’s airing but I am very glad I picked it up. You can tell just from looking at it but the shows animation team has a lot of the same people as one of my favourite shows, Haikyuu so obviously the sports parts of the show are animated brilliantly.

Unfortunately the shows characters spend a lot of their time in flashbacks and using repetition of still frames, particularly during the ballroom scenes and they use them to break up the dances which is a shame because watching those was my favourite part and continuously interrupting them did get tedious in the second half of the show. Overall it was a good and enjoyable watch and I would recommend it with an 8/10 score.

Recovery of an MMO junkie: Adorable and easy to watch. The plot is kind of obvious but knowing what’s going to happen surprisingly increased my enjoyment of it. I believe I gave it 7/10.

Kino’s Journey: the Beautiful world: I had such high hopes for this show but ended up dropping it about 6 episodes in as the show went off on a tangent and stopped showing Kino in their own show, which wasn’t necessarily bad, but I was completely uninterested in the other characters. I’ve still got to give it credit for the beautiful designs and animation though.

Love Live Sunshine: Another show for the dropped list, unfortunately. There’s only so many times I can hear the same recycled positivity speeches and high pitched screaming about nothing. The girls are still cute though.

Junni Taisen: The plot was figured out by the third episode and therefore the show was dropped, I won’t spoil it for anyone who wants to watch it but I have not heard anything good about the ending.

Love is like a cocktail: I couldn’t really rate this one seeing as the only reason I didn’t drop it is because each episode was about 3 minutes long and the show itself had no real content but hey if watching a cute girl get drunk is you’re kind of content then knock yourself out.

Kings Game: The Animation: Too edgy for me to handle. I don’t actually know anyone who hasn’t dropped this show. Watch at your own risk!